This time I’m proud to be able to present you the second official FtA! Demo/Playtest Game report. This time I travelled to lovely Leipzig, where LindenCon ist situated. Under the shade of the trees, many tents were erected to house 3 days worth of gaming. The main house of the youth centre was also open for gaming and sleeping. Of utmost import was the shower. With it’s help we fought valiantly against the Demons of Greater Transpiration and the fiendish tricks of the cloud-being Smellfeet, which regularly attacks the multi-person tent dwellers in the darkneess of night, and rob aspiring or veteran GMs their much needed inspirational nap.
On Friday your friendly neighbourhood Prussian GM Settembrini, refereed the lost Traveller classic convention module Memory Alpha. Spiced up with top notch illustrations, matte paintings and concept art, shamelessly plugged from teh intarweb, the adventure was well received with the audience. Interestingly, nobody played or had heard of Traveller in their gaming careers, so I constantly was explaning Traveller to interested passersby for the rest of the convention, as well as to the group itself.
Then I participated for the first time ever in a LARP event, namely a Vampire Live domain-thingamajig. It was very interesting, but I found out, that this hobby is really not for me. I got some ideas, and even some kicks out of it, but this would be an article unto itself.
Then saturday came, and with it the FtA! playtest. Quickly the group was filled up with six players, four of whom didn’t know me nor had ever heard of FtA! The only thing that lured them in was the promise of the system name and the short „save the priness“ blurb on the program. It took one hour to generate characters and explain the rules, a time the players interestingly enjoyed, as they were already fleshing out hteir character concept, and started forming a chaos-leaned band of musicians with accompanying rogues, a dancer and a outcast dwarven roadie.
Then adventure commenced, and they had their first fight with some wild boars. The Orcish Bard and the dwarf slugged it out with the boars, whil the halfling sex-dancer (rogue: thief) hid behind some bushes along with the ranger (rogue:loremaster „wilderland survival“) to do miniscule damage with sling and bow. They regularly rolled just a little above 17, so the damage was so low: wild boars have a DR of 6!
So the battle was looking bad, when the elven show-cerer (bard and illusion spelllist) generated noises which drove one boar away. The most important part was that the assasin (human barbarian rogue: assasin), loyal follower of Arioch (chaos), backstabbed one boar for double damage. After that, it was six adventurers against one boar , so the boar ran for it’s life.
Enter the arrogant baron. He accused them of poaching, and demanded theri services for a mission in exchange. He wanted them to retrieve some pure elemental water and fire from two elemental temples (chaotic water, formerly guarded by Pixies and lawful fire, formerly guarded by dwarves), to open his own portal of Earth (balance).
The players headed for the Water-Temple first, where they cleverly tricked the kobolds who had set up shop in the abandoned temple into believing an orcish war party was going to drive them out. The Show-cerer and the Orcish Bard worked in conjunction to pull this stunt. They explored the rest of the temples, had some more small combat encounters, which they handled well, cause they outnumbered the enemy. Fun was had with the magical fountain tables and a pixie teleport-device. They solved the riddle and happily came back to the arrogant baron with a jug full of purest of waters. The players were allowed to level up, which was greatly enjoyed, as can be seen on the picture. I had only brought one copy, so it took about ten minutes to get everybody levelled correctly. 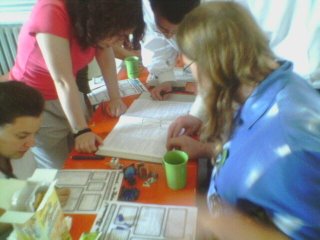 Then the went „Forward…to the fire-temple!“. After arrival, they quickly solved the entrance riddle, but the dwarf follishly, or knowingly just ran into the great hall, were a huge spider jumped onto his head. As he gained maximum HPs, he didn’t care about it, his mates moved in and slaughtered it in just one more combat round. Exploring further, a sort of throne room was found were the ghosts of the two dwarvish Consules kept bickering at each other about who’s fault it was that the Khunlands were overrun by Goblinoids. After some weird and kewl character play on the Orcish bards side, one player just stumbled into the neighbouring room, where nine skeletal dwarven warriors and a dwarven mummy were „parked“ should the consules need them. After some back and forth, they decided to destroy the undead. They nearly died, because they let the dwarf storm ahead alone, against several opponents he lost 20 HP in the first round. Two players joined and they set up a nice bottleneck, so that three characters fought two skeletons at a time. The ranger player only did miniscule damage with his bow, but refused constantly to join the melee, he whined: „I’m a ranger, joining melee would be powergaming. Shooting arrows is what a good roleplayer does.“
Nobody talked to him after that, he was mainly ignored for the final hour of gaming. The ranger’s decision nearly cost the dwarves life, as the mummy went into the bottleneck, and with the additional 3d6+5 from the skeleton was able to overcome the three other melee-participants. Oh, and the ranger didn’t fire at the skeleton along with the halfling, so the skeleton was still around in the melee phase to add his aforementioned bonus.
Still through a fantastic triplet of sixes, the dwarf warrior did double damage and the dwarven guardian mummy was no more.
They solved the fire statue riddle-trap, and lost only one player character in the process. Happy and on time for the tombola, the fire was delivered to the baron. One player said it was OK, one said it was nothing new, but he had a great time, the ranger quitly walked away and the two girls said they had a great time, and asked me when I’m running again.

More collected comments by players:
– it’s a poor mans D&D
– stunts should be made before the melee phase to encourage them
– concern was uttered that the nice tactical elements were indeed enjoyable, but could grow boring due to lacking tactical options and tactic-optimizing behaviour
– the roll and rock nature of the rules were lauded
– the character gen was lauded
– concern was uttered that it might be only suited for dungeons (which implies it was so enjoyable that a more general approach would be welcome)
– spell lists were lauded
– the background was labeled as nothing new or special, just regular fantasy stuff 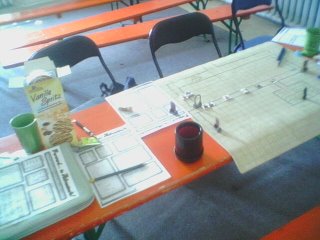 Comments by me, the DM:
– Character advancement should be spelled out in a table for each character.
– there should be a overview skill list, I constantly mixed up d20 skill names, and the FtA! skill names
– trap triggers should be fleshed out, so that you can roleplay the trap disarmament. People love that, if not you can still just roll.
– combats can be hand waved sometimes, when it was 3 PCs against one Skeleton, I often said don’t roll, it’s demolished. I’m not sure this is intended or if the player are cool with this. I’d like to see some rules for large, single monsters having more options other than having a lot of boni and HPs. Several attacks? free stunts? I don’t know.
– the tables for monsters should be expanded
– the trasure, trap and room tables are very nice to supprot dungeon creation, but need fuddling by the DM. A totally rolled up dungeon will be quite silly and illogical.
– game prep in FtA! let’s me more time to develop a dungeon and it’s traps and special encounters, because I don’t have the large overhead 3.5 monsters or even worse levelled npcs demand. I liked that!

All in all, it was a good session. After the session, the tombola ensued. There were very cool things to win, many up to date hardcover books like Eberron, nWoD, Werewolf, or DSA supplements. I won three times: a DSA boardgame (which I traded for a brand new WHFRP 2nd Ed. someone else had won but didn’t like!), an Engel Poster along with the DSA Metaplot-Newsletter, and finally, after shouting out the true nature of the game with a laughing voice (which gave me several concerned sidelooks) I won:

Boy, I had to pass it around, so that the people would know, that I didn’t made the androgynic flower-penis story up! Does anybody like to have it? Pundit, Jeff? Maybe it’s more a thing for Spike?

So, I hope you had a good read about FtA!, please feel free to comment/discuss in my Forum, this time, we’ll all speak english for a change.