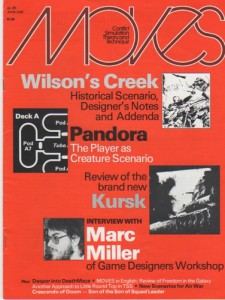 ostikyan: What do you think the role of roleplaying games is and will be in gaming?

Marc Miller: Role-playing games are really big right now. Personally, I see it taking care of a major problem serious gamers have always had — which is the closet Nazi. Once upon a time, we had a lot of problems with people who really wanted to be the Germans, not because they’re Nazis but because they’re really good, or because they had colorful uniforms. And those people were kind of men without a country. They didn’t really have any place to go, and it ended up that the closet Nazi syndrome appealed to them.

Now, they wear armor and carry swords and slay dragons – which is a more healthy enterprise, I think. That’s what happend [sic], that a lot of people really transfer their feelings into the role-playing — something which wasn’t available to them before. To some extent, that has cleared the historical market out.

GC: I know what you mean. It is amazing, some of the people who get deeply involved in role-playing. I know several people who have essentially flunked out of college because they’re playing D&D or one of the role-playingg games to such an extent that tehy don’t get the work done.

MM: Right. And they used to do it when they were playing Russian Front games. Mow they do it with role-playing games, and I at least think it’s healthier. They aren’t forced now to feel Nazi feelings — anyone can feel fantasy feelings without being looked down upon politically or socially. I think it’s a lot healthier. i see a lot of expansion of roleplaying into other fields. I see some mating of role-playing with the boardgames. I see specific areas turning up role-playing games — like piracy, like World War II — which hasn’t been done yet. Unfortunately, or perhaps fortunately, those role-playing games are going to be minor. The major emphasis is on people who live alternative lives, and the Society for Creative Anachronism is another aspect of the same thing. Fields for role-playing are relatively limited in that sense, for people who’ll grow totally dedicated to them. They end up being science fiction and fantasy.