I had some arguments of the benign kind about the nature of the OSR. Also, I had some online observations regarding „the“ OSR. What became clear quickly is that what is now thought of as „the“ OSR is filled by new arrivals. That is all fine and dandy. Obviously, they produce interesting if not award-winning, stuff on the avant-garde part of the spectrum, and solid adventure fodder on the other. So I am not saying there is not a movement or collection of movements. There are movements with momentum.

But the alleged old-school style itself has been bugging me for quite a long time. Because I do think that it does not exist, and that attempts at explaining the alleged old-school principles to outsiders and new arrivals has been utterly pointless and actually damaging. Especially in communities lacking exposure to actual play of Red Box D&D and especially, the lynchpin, first edition. In the German RPG community, most alleged OSR-fans treat products from „the“ OSR as some kind of Story Game or Forgian Gamism extravaganza. And misunderstand many things. Or they read the primers and make absurdist statements regarding the impossible nature of traps and the impossibility of „the sandbox“ campaign in what they assume to be old-school roleplaying. And I witness the same in English language gaming discussions. It’s either a fad or a „THING“ which to me, as a non-aligned gamer, seems wrong on both accounts. Both receptions are not „real“, that is not authentic in the Hip Hop-sense.

Now, instead of trying to correct and combat these hypocritical misunderstandings (in both directions: positive as well as negative), I want to point out a crucial fact that currently few people actively bring into the discussion:

First Edition never died. At the very last, if there was a renaissance of something people want to call „old-school“, then it now lasts longer than the dark age lasted!

Again: the Revisitation of the period from ’74-’85 has a longer history and more products „in-the-spirit-of-the-period“ than the period itself!

Know then, that it is the year 2017. We all agree that 3rd Edition has had an uninterrupted stretch of publications since 2000. That is 17 years. For those who were around to remember, 3rd Edition was launched by „going back“ to the Dungeon and „going back“ to Greyhawk.  Going back to challenge and trap based play. Quite literally, the game officially returned to the Temple of Elemental Evil. And it created an uproar, a resurgence in popularity that is holding on to this very day in the form of Pathfinder. It begot not one, but four sequels (3.5, Fuck Edition, 5th Ed., Pathfinder) and many, many offshoots, of which „the“ OSR is just one. So, challenge-based Dungeoneering was ruling supreme from 1974-1985 and starting again in 2000 until this very day. At the very least (below I shave off some more years from the dark age). So we have 29 years of solid Dungeoneering. Seventeen of which are the last 17 years, which is a longer stretch of time than the original 11 years of the golden age. But, you might say, was there truth in these last 17 years? Was this really a resurgence of true Dungeoneering as Gary meant it? Well, at the very least Dungeoneering as the Judges Guild meant it because once 3e and the SRD were out, they immediately started publishing the stuff from the olden days via Necromancer Games. 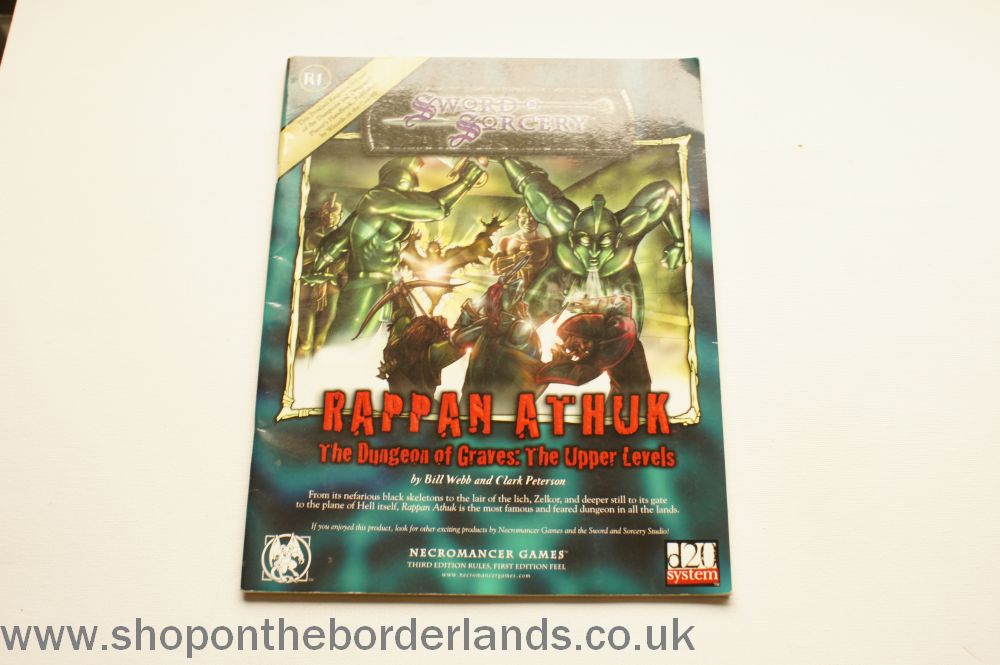 If I take a peek at the much talked about Wilderlands of High Fantasy, then I can see that Melan himself has a longer publication history in the official Wilderlands for 3E than the entire lifespan of the original Judges Guild was (1976-85 [9] vs 2004-2017 [13])! Furthermore, even before JG via Necromancer games started 1e-ing 3e (itself a vehicle for Gygaxian Dungeoneering), they republished the City State in 1999. Also, let’s not forget that 3e itself was preceded by publication of classic modules in their original form as well as the backbone of any D&D scholarship: The Dragon Magazine Archive in 19-fucking Ninety Nine. That was over 18 years ago. The whole Dark Age only lasted till 1999 then, and while the evil in the form of Dragonlance was around, 2nd Edition hit the shelves only in 1989. Making the proper Dark Ages run for exactly ten years (1989-1999). Ten years of evil 90ies-style overland adventure gaming are the anomaly here. Giving the concept of „1e-like  play“ its own name is utterly ahistoric. Sure, there are deviations. The Deviations are legion. And I have and will fight many of them. But do not tell me that the actual baseline, the actual foundation that informs the hobby is some acquired taste like Old Wines or Cigars. No, the masses have enjoyed (or could have enjoyed) True Roleplaying for over 30 years, with only ten years of actual Darkness in between. And even in between 1989 and 1999, First Edition books were still sold officially. And some modules staid true enough, like Night Below or Undermountain. Furthermore, while 2e was that Antithesis of 1e in spirit, the rules were so similar, people could keep playing if they wanted. And some did, enough did. Like medieval monks, they kept the mediterranean wisdom.

So what is left? The ORIGINAL online meaning of old-school. And that is a forceful rejection of First Edition AD&D. A fundamentalist movement that wanted to go all the way back to 1974. But the reasons and repercussions have not been understood by the new arrivals mentioned above. Especially in continental Europe, were 1e was not actually played a lot. And when I see people now, talking about the alleged „old-school“ way of playing, as if it was something novel for  a DM to create a world and let players play in them…I cannot take it serious. In fact it is damaging and demeaning to the hobby. Glorifying the past for whatever reasons is becoming more ridiculous with every passing year. Differentiating between 1e and 3e play () is meaningless to the current crop of „OSR“ writers & audience, the subtleties of Encount4rdization and commodification aka Tyranny of Fun(tm) are lost to people, who play 5e and have not witnessed the tactical railroading that Mike Mearls and James Jacobs once brought in. OSR was a term to seperate the „evul“ that was 3e to some people, who rejected it so harshly, that they rejected 1e with it. But these are battles of the past, fifteen years ago. Nowadays one just can talk about rules-light, rules-medium and rules-heavy D&D. And there is whack DMing (mollycoddling the players, railroading etc., Kender, Drizzt you all know that shit…) and True-School DMing (DM makes world, players play their characters, the world reacts ad nauseam).

Dungeoneering, in its many forms, won. Exploring a DM-created world won. There are deviations, but there is no need to put oneself philosophically into some allegedly exotic „old-school“ corner.

Except for marketing purposes.

*This is in english because it is mostly a Kata-rant written for Melan, but I think it would be too pontificating for a blog comment on his beyond formalhaut.